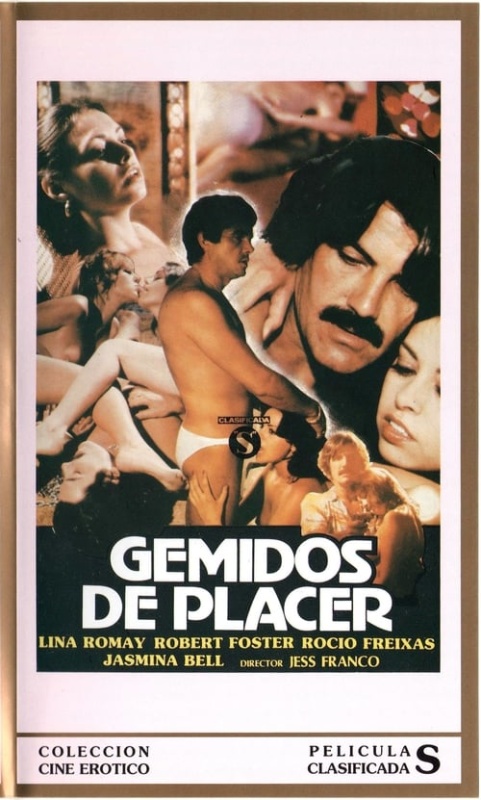 Gemidos de placer (1983)
A Man (Mayans) invites a Woman (Romay) to his house to live with him, just before the arrival of his wife (Vela) who is coming back from the insane asylum.
IMDB information:

Antonio (Antonio Mayans) likes sometimes deadly sex games, which he lives out together with his wealthy wife Martina (Rocío Freixas) and the employee Marta (Elisa Vela). The weak-minded Fenul (Juan Soler Cózar) is responsible for removing any traces. However, Martina is currently in a mental hospital because of her nymphomania, and Antonio has in the meantime acquired the young Julia (Lina Romay) as a lover you have made a diabolical Plan with her: they want to murder Antonio's wife during an orgy, and this should serve at the same time the sexual satisfaction. But Antonio will not be able to squander his wife's fortune, because she is an important step ahead of him.
Author
Gerald Kuklinski
Review

It's October 1982, and Jess Franco is in one of his most productive phases. For Golden Films – namely Stella and Emilio Larraga – he makes one Film after another, artistically completely left to himself and his fantasies. Although problems are on the rise, Franco still has no idea that many of these productions will spend years on the shelf due to the Larragas ' inexperience with Film and its marketing.

With" Gemidos de Placer " Franco sets off once again on de Sade's Terrain. In plain language: he re-wrote "Sinfonía Erotica" (1979), which in turn is based on an Episode from de Sade's "Justine" and was already enriched in Sinfonía with elements from de Sade's "philosophy in the Boudoir". Or even more clearly: he only uses de sade's elements. These are very clear here, in the form of imagination and practice for sexual desire to kill people and finally still enjoy their newly murdered bodies. For this, the viewer already gets two clear hints at the beginning. Once there would be the story about a murdered boy, which is only told to us in the Off. Of course, it is even clearer when Antonio fantasizes about the impending murder of his wife during a number with Julia. Nothing for sensitive minds.

But we know Franco. Men are not the superior, men are weak, victims of their desires. And so Antonio's hopes are doomed to failure, because Julia and Martina have known each other a little longer than he guessed, and so it is ultimately he who has been chosen as the victim, a victim that serves the two women for liberation from Antonio's perverse influence. The Finale also clearly shows how no matter Franco's logic and reality at this time of his ultimate artistic freedom. The body of the husband simply lands in the domestic Swimming Pool, no thought is wasted on possible police investigations. And the women leave the Villa on their way to freedom, the place of Perversion – stark naked. We do not know how far they come. You have to see this rather symbolically.

So what awaits the viewer, a crime drama with a lot of dialogue and bloody killings during sexual acts? lower Austria. There are two murders, both not visually but very hard in terms of content. Most of the movie basically consists of a debauched weekend with a lot of simulated Sex in Long camera shots. But this is by no means as boring as it sounds when writing. "Gemidos de Placer" is really masterfully filmed and musically skilfully accompanied. A large part of the score comes from the Daniel White LP "Mystère Bleuté", but also common Franco/White pieces from previous Golden Films productions can occasionally be heard. The film was shot in a specially rented Villa in Calpe, from the windows of which you can see the Peñón de Ifach at the other end of the Bay. The latter a frequent involuntary guest in Franco's films.

One more thing: Lina Romay, who you often know from the Golden Films era rather Moppy or with a blond wig, looks absolutely wonderful in" Gemidos de placer". She wears her hair long and smooth, sometimes tied into a ponytail and looks remarkably slim.